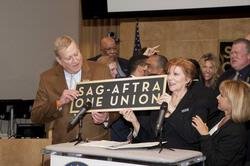 "With this historic vote, members of both unions have affirmed one of the most basic principles of unionism: Together we are stronger," said SAG-AFTRA National Co-President Ken Howard. "This merger, the result of months – really years – of planning, brings together the best elements of both unions and positions us well to thrive in the changing 21st-century media landscape."

"The merger of these two unions is a huge victory for our members, and it is a monumental achievement for the labor movement," said SAG-AFTRA National Co-President Roberta Reardon. "As this vote today proves, great and transformative things are possible when working Americans stand together and shape their collective destiny through their union. I applaud every member who voted, and invite all members, locally and nationally, to join with us in building a successor union worthy of AFTRA and SAG."

In July 2010, Reardon and Howard, as presidents of AFTRA and SAG respectively, created the Presidents' Forum for One Union to facilitate focused and informed discussions between leaders of the two unions and their members to establish a common vision for a single, new national union.

The forum included a nationwide Listening Tour, in which Howard and Reardon traveled to cities across the country to connect with members and solicit their feedback for a possible merger. They received an overwhelmingly positive response.

In June 2011, elected member leaders from both unions formed the Group for One Union — known as G1 — which subsequently created workgroups to focus on key areas such as governance, collective bargaining and operations for the proposed new union. In late January, the National Boards of AFTRA and SAG overwhelmingly voted to send the merger package to members for ratification.

The following are results for both unions: