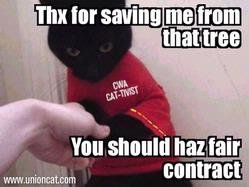 Working Without a Contract

45,000 CWA and IBEW workers were forced into a 15-day strike in August. Verizon’s demands included:

Freezing the value of pensions for active workers and eliminating them entirely for new workers
Slashing disability benefits for workers injured on the job
Eliminating all job security language and continuing outsourcing of work to low-wage, low-benefit, non-union contractors domestically and overseas
Imposing health care payments up to $6,700 on retired workers and $6,800 on active workers.
Eliminating paid sick days entirely for new workers
Limiting paid sick days to no more than 5 for all other workers

Union workers returned to work under the terms of their contract – and the promise of good faith negotiations and a restructured negotiation process by Verizon’s management.
Verizon could be leading the way on America’s economic recovery. Instead, they’re contracting out and sending overseas customer sales and service, billing and many other types of jobs.

For DSL tech support alone, 2,600 jobs are done in Mexico, India, Canada, and the Philippines. More Fiber Solutions Center jobs are contracted out than done in-house. Other jobs that are no longer done by Verizon employees but are instead outsourced to lower-wage contractors from outside or inside the U.S.:

Yet Verizon’s management—despite billions in profits—still refuses to offer a fair new contract, insisting on the same types of demands that triggered the August strike. Even though the company makes billions in yearly profits, Verizon claims wireline profits are too small. But Verizon Wireless is not rewarding its workers for the division’s relatively higher profits:

Unionized wireless workers are also fighting for a fair contract. Verizon Wireless wants its workers to pay thousands of dollars more for health care, and has slashed the level of benefits. Retirees have no income security. When non-union Verizon Wireless workers try to form a union, the company intimidates and harasses them, going so far as to close call centers to stop the union from spreading.

“American companies want American profits but they don’t want to pay American wages—and that should be stopped.”
—James Burgund, 15 years with Verizon