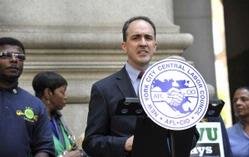 “It is a myth that somehow we can’t have safe communities without it,” he said, added that the problem is that the NYPD overwhelmingly targets black and Latino young men. “We need to find a better way, a fair way, to protect our communities while protecting the rights of all.”

“The tens of thousands of high school students who are stopped—what are we teaching them?” asked Michael Mulgrew, president of the United Federation of Teachers. “...We are teaching children a very, very bad lesson.”

“There has to be a better way to enforce the law than by breaking the law with random searches based on racial profiling,” John Samuelsen, president of Transport Workers Union Local 100, said in a statement distributed at the press conference. “This is the same tactic used by the British in Northern Ireland, stopping people just because they were in a Catholic neighborhood. Violating the rights of hundreds of thousands of totally innocent New Yorkers is not community policing, it is just plain wrong and must end.”