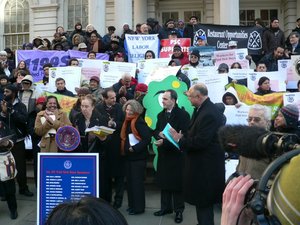 As President of the New York City Central Labor Council (AFL-CIO), I represent over 1.3 million workers across many industries and professions in the private sector, public sector and building and construction trades.  Many of these workers have the benefit of collective bargaining agreements that stipulate for time off with pay during illness.  However, there remain far too many workers in the United States who cannot take time off from work and, if they are compelled by health or family needs to do so, risk disciplinary action or firing.

Low-wage workers represent the majority of those not afforded paid sick time.  In 2011, 66% of low-income parents of school-age children did not have access to paid sick time.  The stress of caring for a sick child is great enough without having to decide between missing bill payments or potentially losing your job.

56% of workers who prepare and serve food do not have access to paid sick time, clearly representing not only a hazard to others in the workplace, but to the general public with whom those workers come into contact.  Providing paid sick time to workers, particularly in the food service industry, would curtail the spread of illness and present an overall benefit for the greater workforce of our city.

Paid sick time should not be a privilege for a chosen few, but a basic right pursued by private and public employers, and one that is provided to as many workers as possible.