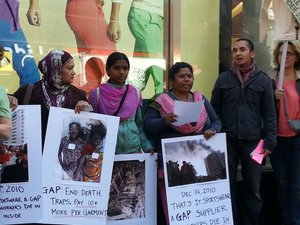 Last year, 112 workers died when a garment factory in Bangladesh that supplies Walmart, GAP and others burned to the ground.  Conditions at the factory were so lethal that it didn’t have a single emergency exit, and supervisors prevented workers from leaving their sowing machines even when the fire alarm went off. Sumi Abedin, one of the garment workers trapped inside, survived the tragedy by jumping from the third story of the burning building.

Walmart could have prevented this tragedy if they’d supported a plan to upgrade fire safety at Bangladeshi factories. Instead, Walmart blocked the plan, claiming costs would be too high. That’s why Sumi visited New York City to speak out and demand justice for all the workers who were killed last November.

This week, workers and activists raised their voices with Sumi to support safety measures that would prevent tragedies like this.  To sign the petition in support of these workers, please click here.