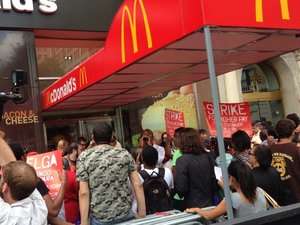 Last Friday, fast food workers gathered near a Bushwick Domino’s to protest the firing of delivery driver Gregory Reynoso. Reynoso was fired for his work to help his fellow employees organize for better wages and the ability to join a union.  Friday’s rally kicked off a week of nationwide strikes, beginning right here in New York on Monday.

Starting at 5:30am, fast food workers walked off the job, and joined community and clergy supporters to protest against low wages and workplace mistreatment.  The local walk-outs continued throughout the day, with protests throughout Manhattan, Brooklyn and the Bronx, and ending with an afternoon rally in Union Square, where supporters marched and protested outside of a nearby McDonald’s.

On Thursday, April 4, 2013, hundreds of fast food restaurant workers in New York City staged a one-day strike to call attention to the mistreatment