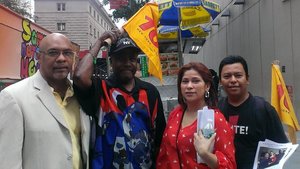 This week, members of United Here have been picketing outside of 55 Water Street, protesting the Post-Sandy layoffs of more than 50 workers.

The owners of 55 Water Street had held a contract with Aramark, the workers’ employer, for decades.  During Superstorm Sandy, the building sustained a great deal of damage, forcing closure for ten months of repairs. The building, which sustained a great deal of damage after Superstorm Sandy, was closed until August of this year.  Once the building reopened in August, only a handful of workers were reinstated, with roughly 30 others assured they would be reinstated on a rolling basis.  On September 6th, all of the workers were let go when the building changed management.

The new management company, Masterpiece Caterers, has refused to even interview the former Aramark employees.  Please continue to check our website and social media sites for updates on this situation.