Labor, Community and Elected Leaders Gather at City Hall to Protest the TPP 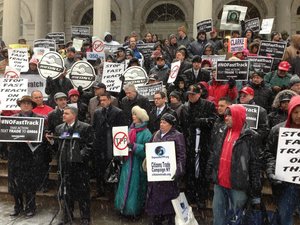 On Tuesday, a group of labor, community and elected leaders gathered for a news conference to protest the fast-tracking of the Trans-Pacific Partnership (TPP), a proposed trade deal that would kill American jobs, and eradicate environmental protections that working men and women have fought to maintain. Fast Track legislation, which would create a process to ram the agreement through Congress, was introduced in the Senate and House on January 9th, and surrenders Congress’ Constitutional rights with respect to trade policy.

The TPP is being negotiated in secret between the United States and 11 Pacific Rim countries including Japan, Mexico, Malaysia, and Vietnam.