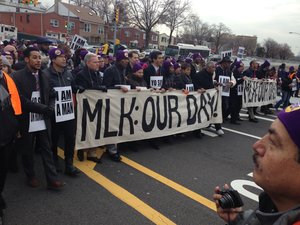 Airport workers in New York City have been fighting for economic justice, dignity and respect for over two years and this week they won a huge victory when the Port Authority agreed to meet their demands.  A letter written by Patrick Foye, Executive Director of the Port Authority agrees to give workers their first paid holiday – Martin Luther King, Jr.’s Birthday; phase in a wage increase to $10.10; sit down with airlines, contractors and 32BJ over the next 90 days to hammer out a 3-5 year plan with the goal of delivering fair wages and benefits to airport workers.