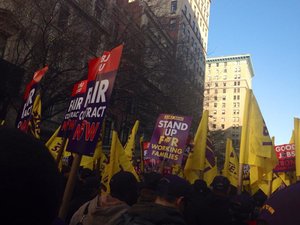 On Wednesday, April 2, thousands of 32BJ SEIU members and supporters gathered at 79th Street and 5th Avenue to take a stand for Residential workers.  The eastbound march ended on Park Avenue, where union members and officials took the stage to address the already energized crowd.  Speakers included 32BJ president Hector Figueroa, and Secretary-Treasurer Kyle Bragg, who addressed members about the importance of banding together to fight for the rights they deserve.

"Today's rally represents the best of a unified labor movement demanding fair wages for honest work," said Vincent Alvarez, President of the New York City Central Labor Council, AFL-CIO.  "Workers have come together across various industries to support our 32BJ brothers and sisters, and we are all here standing up for a fair contract that will keep up with the cost of living, while also maintaining good benefits and workplace respect.  We are fighting to grow and maintain good, middle class jobs in our city, and we are resolved to stand with 32BJ for as long as it takes to ensure that all workers - unionized and non-unionized - get what they need and deserve  to make it in New York City."

An hour into the rally, a 32BJ member made a motion to authorize the union's bargaining committee to call a strike if a satisfactory commitment is not reached by the April 20th expiration of the current contract. The motion was enthusiastically seconded by the crowd of members, which then voted unanimously to authorize the strike.

The City's Labor Movement stands firmly behind our 32BJ brothers and sisters as they fight to grow the wages and benefits of the 30,000 Residential members who work hard to make NYC home for the tenants in the buildings they serve. #MakingNYhome