March for the Dream 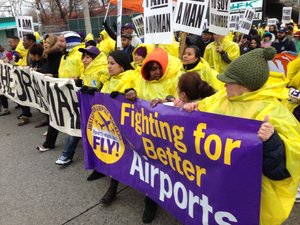 Supporters from the NYC Central Labor Council, and community groups like La Fuente, Make the Road NY, NYCC, and UnitedNY joined the workers and union members for a morning rally at the Lefferts Boulevard stop of the AirTrain before heading off on the 10 mile march. As the group marched, they sang, chanted, and reflected on the life of Dr. King, which was cut short 46 years ago, while he was in Memphis, Tennessee, helping to organize sanitation workers.

The march ended outside of LaGuardia Airport, where clergy and elected officials like Assembly Members David Weprin and Francisco Moya, as well as City Council Members Julissa Ferreras, I. Daneek Miller and Costa Constantinides commended the marchers for standing up for workers' rights.

"On this day 46 years ago, Dr. King lost his life while in Memphis standing with sanitation workers who were fighting for their rights. Today we are marching with New York airport workers who are fighting for these same protections," said Vincent Alvarez, President of the New York City Central Labor Council, AFL-CIO.   "It is unconscionable that the companies employing these airport workers think it's ok to pay poverty wages, all while refusing to provide the safety equipment necessary to protect employees and passengers alike. The Central Labor Council is determined to stand with these workers in their fight, as they protest for the wages, benefits, and protections all workers deserve."