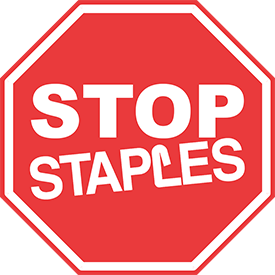 The American Postal Workers Union and the National Postal Mail Handlers Union have called for a boycott of Staples stores.  The National AFL-CIO has endorsed the boycott and union members are being asked to avoid patronizing Staples.

As a result of a deal between the USPS and Staples, full-service U.S. Post Offices are being replaced by knock-off post offices in Staples stores that are not staffed with U.S. Postal Service employees.  The NPMHU hopes to use the boycott to pressure the USPS and Staples to stop the deal.