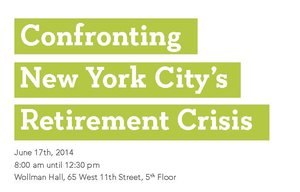 As we continue to recover from the effects of the recession, New York City and the United States are in the midst of a retirement crisis.  Currently, 59% of New Yorkers lack access to a retirement plan.  Of those who have a policy—either a defined contribution or a defined benefit plan—the majority have less than $30,000 for their retirement.  With an average annual benefit of only $15,528, Social Security is quickly becoming an inadequate income replacement at retirement.  Without a supplemental income, many individuals risk spending the later years of their lives in poverty, adding expenses to constrained working families, and require support from government at all levels.

It is imperative the labor movement identifies ways to ensure that hardworking men and women are able to retire with the peace of mind they won’t be priced-out of our city. In order to address the crisis of retirement security in an effectual, innovative way, the New York City Central Labor Council, AFL-CIO (CLC), is partnering with the Schwartz Center for Economic Policy Analysis (SCEPA) at The New School.  We want labor to initiate and lead a broad coalition of stakeholders in the City's economic and social future.  A strong coalition with organized labor, academia, business, elected officials, and other allies, we could change the conversation surrounding retirement policy.  To create effectual change for the working people of New York City, we have to build new, long-lasting relationships around critically important issues.

We invite you to join us on Tuesday, June 17th, from 8:00 am until 12:30 pm, for a conference on retirement security.  The event will take place in The New School’s Wollman Hall, located on the fifth floor of 65 West 11th Street.   Joined by the City and State Comptrollers, the conference will delve into both the problems and solutions to New York City’s retirement security crisis.  We can come together to create broad-based prosperity, individual financial security, and increased economic activity.  You can register for the conference at www.NYCCLC.org/RetireNYC. The CLC and SCEPA hope to see you on June 17th.

We invite you to join the NYC Central Labor Council, AFL-CIO & the Schwartz Center for Economic Policy Analysis on T