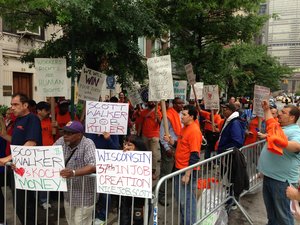 On Monday, union members from across the city gathered outside of the Union League Club on 38th Street to protest an appearance by Wisconsin Governor Scott Walker at a fundraiser for Republican Gubernatorial Candidate Rob Astorino.

Representatives from the public sector, private sector and building trades turned out in droves to express their opposition to the anti-union Wisconsin Governor visiting New York City.  Chants of “Scott Go Home” echoed down the block as Governor Walker entered the club.