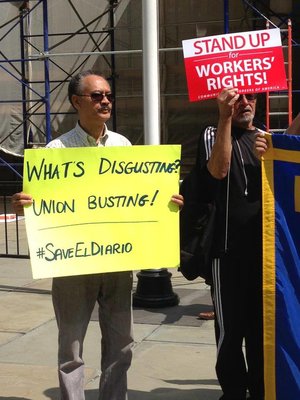 This week members of The Newspaper Guild, CWA Local 31003, were joined by supporters at City Hall denouncing the illegal firing of 12 workers by El Diario/ImpreMedia.  The workers were fired in June when the company began to implement their union-busting campaign.

Management stated that they have intentionally targeted members of the Guild for firing while replacing them with non-union staff.  As the firings violate provisions of their contract, the Guild has filed charges with the NLRB.