Fasanella: Lest We Forget 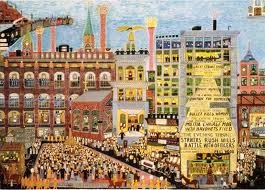 Please join us at a reception at the American Folk Art Museum (Columbus and 66th Street) and see the exhibit marking the centennial of Ralph Fasanella's birth. This exhibit was curated by the Smithsonian American Art Museum.

The purpose of the reception is to raise funds to purchase at least 2000 copies of the documentary Fasanella to distribute to public schools through out New York City. Fasanella won second prize at the Chicago International Film Festival.

A $30 ticket entitles guest to a DVD for themselves and another to be distributed in their name to a high school social studies or art classroom. Larger donations from unions will allow us to distribute many more copies of this great film.

With an instructors guide written & produced by the labor studies department at Michigan State University, Fasanella is a great tool for teachers to introduce student to unions, labor history and immigration issues. As Fasanella himself said, "Don't forget where you came from, remember your roots. Go out and change the world!"

Celebrating Ralph Fasanella’s centennial, the Smithsonian Museum of American Art has mounted an exhibit of 17 paintings and 8 drawings by labor’s greatest artist .