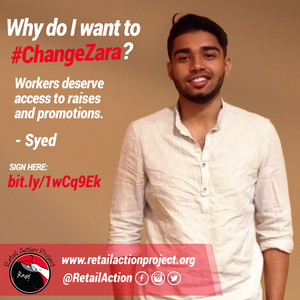 2015 has already shown positive gains for workers at Zara retail locations, with workers receiving raises of $2.50 an hour.  An aggressive campaign by the Retail Action Project (RAP) and the Retail, Wholesale, and Department Store Union (RWDSU) resulted in Zara also increasing the number of full-time positions at their stores.

Since beginning the Change Zara campaign, the workers have seen changes to company practices such as “on-call shifts” in which employees are expected to call the store prior to showing up to see if they are on the schedule.

RAP has upcoming actions planned to support the campaign and secure these gains for the workers.