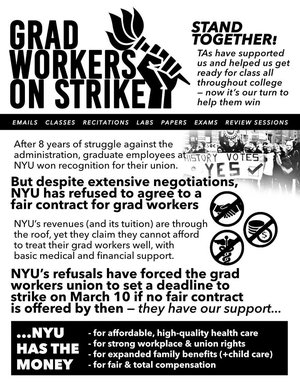 The UAW represents over 1200 graduate workers at New York University and have been in negotiations for a contract for over one year.  It has become apparent that the union will not succeed in obtaining a fair agreement without organizing for a strike.  The union has set a deadline for a limited four day strike commencing Tuesday, March 10th.

UAW members work at both the Washington Square campus in Manhattan and the Poly-Metrotech campus in Brooklyn.  The union and the university are currently in mediation; however, that has not succeeded in settling the contract.  Some of the issues in dispute remain a wage floor of $15/hour for graduate employees who work at the NYU Polytechnic School of Engineering, fully paid health coverage for the workers, minimum guaranteed pay increases, childcare, and other family friendly benefits.

Thursday, March 12th and Friday, March 13th times and locations to be announced