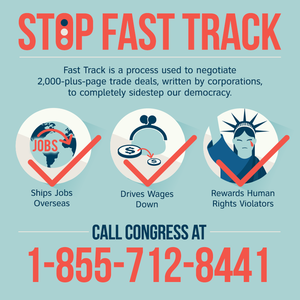 Below is an excerpt from a statement by Mario Cilento on Fast Track for the TPP:

The TPP is a massive, so-called “free trade” agreement currently being pushed by big corporations and negotiated behind closed doors by the United States and 11 other countries – Australia, Brunei, Canada, Chile, Japan, Malaysia, Mexico, New Zealand, Peru, Singapore, and Vietnam.

Under Fast Track, legislators cede their authority to have a say in agreements.  Fast Track forces Congress to take an up or down vote with no ability to amend.  The result: no trade deal has ever been defeated under fast track procedures no matter how bad it is for wages, jobs, small business and the environment.

Fast Track benefits companies from foreign nations that may have no labor standards, no environmental standards and too often no respect for basic human rights.  It is imperative that a thorough debate and airing of these issues be a part of any trade negotiations and Fast Track will limit the ability of Congress to do just that.

Text TPP to 877877 now to be connected to your congressional representative.