One Year Ahead of the 2016 Presidential Election, Workers Rally for $15 and a Union 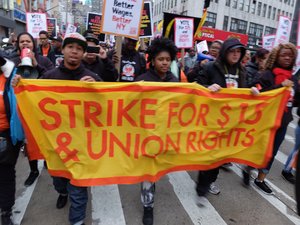 Today, one year from 2016 Presidential Election Day, workers gathered in Downtown Brooklyn to call for “$15 and a Union.”  Representatives of unions including 32BJ SEIU, 1199 UHWE, TWU Local 100, RWDSU, Workers United, CWA District 1, CWA Local 1109, Teamsters 814, Ironworkers Local 40, Teamsters 804, and the Central Labor Council gathered near the Korean War Memorial at 5am, and marched with community groups, clergy, and other supporters to the McDonald’s at Court and Joralemon Streets for a morning rally.

The rally was MC’d by fast-food worker and Fight for $15 member Shantel Walker, who helped to keep the energy high during the chilly, early morning event.  Rally speakers including Airport worker Jordany Bueno, 1199 member and home care worker Patricia O’Hara, Workers United retiree Sigilfredo Roman, Teamsters Local 804 member and UPS worker Dave Loobie, Mayor Bill de Blasio, and NYC Comptroller Scott Stringer spoke of the need for higher wages across the board.  All of the speakers stressed the importance of standing together until all workers have the wages they need to live self-sufficiently in NYC.

After the rally, the group marched up Joralemon Street to the McDonald’s at Fulton Street and Gallatin Place.

An 11am action was held outside of a 125th Street McDonald’s, where local students spoke of the need to raise wages, and allow workers to unionize without retaliation.

A 4pm march from Foley Square to the Wall Street Charging Bull statue will wrap up the day’s Fight for $15 events.