#CUNYRising Rallies for Investment in CUNY Students, Faculty, and Staff 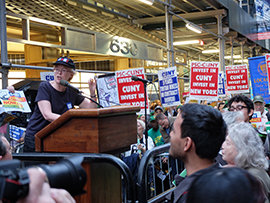 On Thursday, hundreds of workers, students, and supporters gathered to call for increased funding for the City University of New York (CUNY) system.

Members of PSC-CUNY, DC37, UAW Region 9A, CWA 1180, and CWA 1101, and from groups like the Greater New York Labor-Religion Coalition, and the Hispanic Federation took to Third Avenue to stress the need for real investment in higher education. During the rally, current CUNY students spoke about the high quality of education they are receiving at CUNY. Later, PSC-CUNY President Barbara Bowen spoke about the importance of increasing accessibility to higher education.

Following a lively rally, the group marched to the Community Church of New York, chanting the whole way about the need to “Stop the war on CUNY.” At the church, participants continued to speak about the need for CUNY to be able to attract and retain exceptional teaching faculty and staff as a way of ensuring students receive the best quality education.

Members of PSC-CUNY and AFSCME DC37 have been working without a contract for five and six years, respectively.