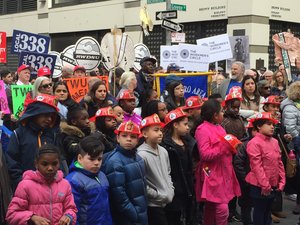 On Wednesday, representatives of labor, community groups and many others gathered at Washington Place and Greene Street in Greenwich Village to remember the 146 workers who perished in the 1911 Triangle Shirtwaist Factory Fire.

Workers, family members, and students ended the event by calling the names of the 146 victims, and laying flowers in their memory.

NYC CLC Secretary Treasurer Janella Hinds penned an op-Ed piece highlighting the continued fight for worker safety, and how today's workers can draw strength from a movement that began 105 years ago.