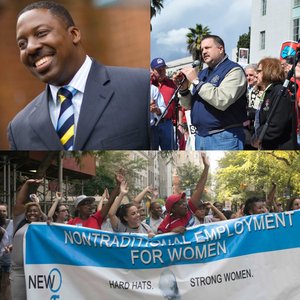 President Loeb is credited with devising and implementing an aggressive organizing and bargaining strategy in the area of motion picture and television production. The policies laid the foundation for obtaining more than a thousand term agreements, the chartering of numerous new locals and the addition of thousands of new members, providing them with meaningful health and retirement benefits for the first time. Because of his belief in providing educational opportunities for the leadership of the IATSE and its local unions, in 2009 President Loeb established the IATSE’s Labor Education Assistance Program (LEAP).

President Loeb has been a member of the AFL-CIO Executive Council since 2008, and he was reelected in 2009.

President Loeb holds a Bachelor of Science degree with concentration in labor studies achieved from the State University of New York's Empire State College in February 2008.

We are looking forward to honoring President Loeb; Gregory Floyd, President of Teamsters Local 237, and Nontraditional Employment for Women at our April 12th Awards Reception!

President Floyd became a member of Local 237 more than 25 years ago when working as a hospital police officer.  He rose to the rank of captain within the NYC Health and Hospitals Corporation, becoming the youngest captain in the HHC’s history.

President Floyd is a featured columnist for both the Amsterdam News and The Huffington Post, and the host of a public affairs program on radio station 970 AM, “Reaching Out With Greg Floyd,” which airs in New York City and on Long Island on Time Warner and other cable TV systems.

We are looking forward to honoring President Gregory Floyd; Matthew Loeb, International President of the International Alliance of Theatrical Stage Employees (IATSE); and Nontraditional Employment for Women at our April 12th Awards Reception!

Founded in 1978, NEW is a sector-based workforce development program that prepares women for careers in the construction, transportation, energy, and facilities maintenance industries.  NEW focuses on skilled, unionized jobs in the trades, benefits, and a path to higher-wage employment. These careers enable NEW graduates to provide a secure future for themselves and their families.

The number of women construction workers in New York City has grown substantially as a result of a coordinated effort between NEW, labor unions, contractors, and government.  With a commitment by these partners to place women in 10 percent of all new apprenticeship slots, more than 600 NEW graduates have found work as electricians, carpenters, plumbers, painters, ironworkers, operating engineers, and sheetmetal workers since 2005.  An additional 225 women have found careers in the energy, transportation, and facilities maintenance industries.  These women are changing their lives and the skyline of New York City.