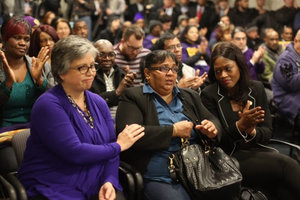 On Sunday, Governor Cuomo introduced the Transportation Worker Protection Act. The state legislation was created after a Muslim Delta airline worker was attacked at John F. Kennedy Airport earlier in the week.

32BJ member Rabeeya Khan, wears a hijab, and was both verbally mocked and assaulted by a traveler. While the passenger has been charged, and faces up to four years in prison, the new legislation would elevate the punishment for assault on an airline worker to a Class D Felony, which carries a higher sentence. Similar state legislation is already in place protecting MTA workers.