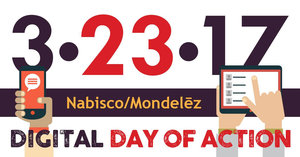 This week, the National AFL-CIO announced the start of a new comprehensive campaign to help protect union jobs.

Per the AFL-CIO, the National Good Jobs Campaign will call out corporations that ship jobs overseas; work toward renewed and expanded public investment in our schools, transportation, energy and communications systems; access to quality health care, including through Medicare and Medicaid; and a secure and dignified retirement for all workers.

The campaign’s first initiative will be a March 23rd Digital Day of Action in support of good jobs at Nabisco/Mondelez. Over the last year, we’ve been telling you about the Bakery, Confectionery, Tobacco Workers and Grain Millers' campaign against Nabisco’s parent company Mondelez, which has been moving jobs overseas. Check the labels, some of our favorite baked products like Oreos and Ritz crackers are now being made in Mexico. The Day of Action will coincide with the one year anniversary of the day Nabisco/Mondelez began laying off workers from its Chicago bakery and sending those jobs to Salinas, Mexico.

Join in the digital Day of Action, and lend your support to helping to keep good jobs right here at home.