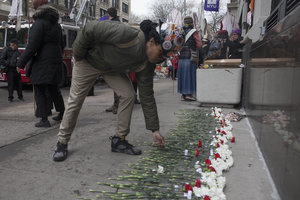 Today unions, community groups, and elected officials gathered outside of NYU's Brown Building to remember the 146 worker lives lost during the Triangle Shirtwaist Factory 106 years ago.

The ceremony included remarks from labor leaders, musical tributes from the Nashville-based group Twangtown Paramours and the NYC Labor Chorus, statements by the family of victims, and testimony from construction workers, a farm worker, and a fast food work on the issue of worker safety in their present-day industries

As always, the ceremony culminated with a reading of the names of the mostly immigrant and young women who perished on March 25, 1911, as the FDNY raised a ladder to the sixth floor, which was the highest the ladder could reach then.

At a time when workers’ rights are under attack, the ceremony served as reminder to recommit to fighting for worker safety, raising wages, immigration justice, and the right to organize.