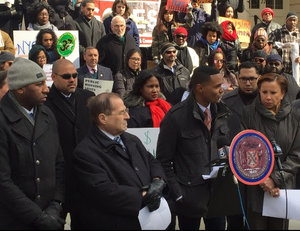 This week, the NYC CLC, District Council 37, and Teamsters Local 237 joined with elected officials, housing advocates, and community members to rally at City Hall against federal budget cuts that would significantly defund the New York City Housing Authority. The rally was led by Bronx Councilman Ritchie Torres, chair of the City Council's Committee on Public Housing. Residents of NYCHA housing spoke about the conditions within housing units.

Immediately following the rally, the City Council held a hearing on the budget cuts, at which NYCHA Chair Shola Olatoye testified that there would be at least a $75.8 million cut from their budget as a result of the Trump Administration’s cuts to the Department of Housing and Development. The Authority has yet to hear about potential additional cuts to capital funding. The fight has just begun to protect NYC public housing.