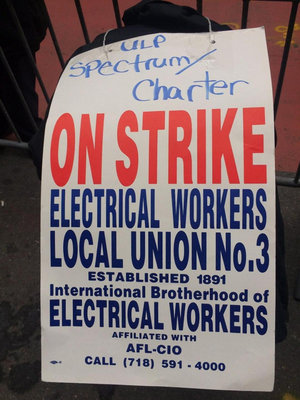 Charter/Spectrum workers continue to walk the picket line this week. Approximately 1,800 workers walked off the job on March 28 after Charter Communications refused to bargain in good faith, attempting to slash benefits by halting their contributions to workers’ pension and medical plans. Charter/Spectrum has unfairly disciplined workers for repeat service calls from customers, when the root cause lies in the company’s outdated faulty equipment and unrealistic promises to customers. The warehouse workers, service technicians, and members of the engineering department have been without a contract since 2013.

While IBEW workers continue to picket every day, the company has hired replacement workers from out of town to perform their jobs. On April 4, NYC Public Advocate Letitia James sent a letter to the company, endorsed and signed by 33 City Councilmembers, urging the company to return to the bargaining table. This week, the AFL-CIO’s annual report on executive compensation revealed that Charter Communications CEO Thomas Rutledge is the second-highest paid CEO, with his total compensation in 2016 valuing about $98 million between salary, pension, stocks, and other bonuses. Charter Communications is long overdue to return to the negotiating table and come to a fair resolution with its workers.

Want to support the workers?  Here’s a list of picket locations, running from 8AM-5PM daily.