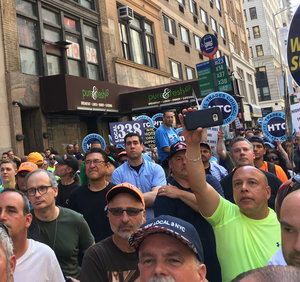 On Thursday, members of Local 3 IBEW took to the streets to protest Spectrum/Charter Communications’ attempts to stop payments to workers’ pension and benefits funds.   The rally was held outside of the company’s E. 23rd St. headquarters, and workers lifted their voices in the name of ensuring that strikers are able to receive the benefits they have earned.

The workers, who have been on strike since March 28, have been without a contract for two years. Spectrum/Charter is looking to end contributions to the pension and benefit fund, which workers have been paying into for 40 years.

“This is sadly typical of the corporate agenda: eliminate a defined benefit pension plan, and disregard the employees wish to remain in the collectively bargained union health plan, both of which have been paid for by those employees for over 40 years through collective bargaining,” said Christopher Erikson, Business Manager of Local 3 IBEW. “We will not be silent, and we ask for support from all New Yorkers as we face a wealthy corporation intent on trying to break the union who represents hardworking New Yorkers. Support good wages and benefits, support union jobs, protect working Americans standards and reject corporate greed. We will not be silent.”

“This attack on workers’ benefits and pensions is another attempt on the part of a multi-billion-dollar corporation like Spectrum/Charter to squeeze workers out of the benefits they have earned,” said Vincent Alvarez, President of the New York City Central Labor Council, AFL-CIO. “We are standing with Local 3, and with all working people, against corporate attempts to boost profits on the backs of workers.”