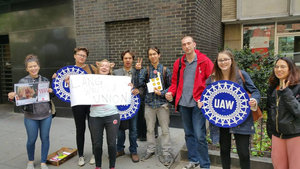 This Wednesday and Thursday, graduate student employees at The New School took a unionization vote. The eligible workforce is made up of teaching assistants, teaching fellows, and research assistants. The union authorization vote is a culmination of years of work, as Student Employees of the New School-United Auto Workers (SENS-UAW) has been organizing since 2014, when they circulated a union card drive.

The New School administration has repeatedly refused to recognize the majority of graduate students who signed cards, forcing SENS-UAW to file a petition with the National Labor Relations Board to initiate an election. The NLRB ruled on April 7 that the workforce could enter a collective bargaining contract with the college as members of SENS-UAW, averting a possible strike authorization vote in favor of a union authorization vote.

The graduate student employees at The New School are backed by multiple public figures: on April 26th, Bernie Sanders wrote a letter supporting their cause, and both Mayor Bill de Blasio and Congressman Jerry Nadler have publicly supported the SENS-UAW vote. According to the SENS-UAW website, the student workers are unionizing because “[they] currently have yearly competitions for precarious jobs that lack a living wage, health benefits, and sick days, while often requiring unpaid overtime hours. We want to change that by addressing these and other concerns through collective bargaining.” If the vote passes, student employees look forward to negotiating with The New School in good faith.