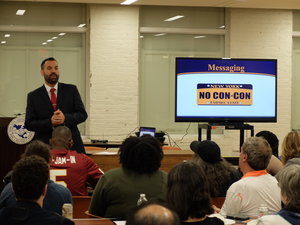 On Wednesday, the New York State AFL-CIO facilitated a training for union members, officers, and staff on Labor’s opposition to a Constitutional Convention.

Presentations included the rollout of a broader campaign to organize union members to convey the importance of a NO vote on the Constitutional Convention.

A Constitutional Convention run by political special interests would cost taxpayers millions of dollars in an effort to achieve reforms that can occur without creating additional, costly layers of government. Meanwhile, the protections we’ve fought for and won would be in jeopardy: the right to collectively bargain, pensions, welfare laws, and many others. Public money is better invested in our schools, crumbling infrastructure, and on other vital services.

Vote NO on CON CON