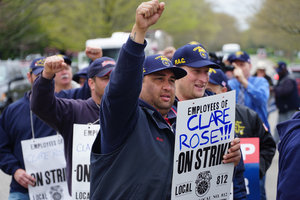 Clare Rose workers have now been on strike for three weeks. More than 100 delivery truck drivers and warehouse workers at Long Island beer distributor Clare Rose went on strike on April 24 after contract negotiations stalled over the company’s proposal for a 30% pay cut and their insistence on pulling out of the Teamsters pension fund.The workers, who are members of Teamsters Local 812, are largely long-time employees of the family-owned company. Within days of the walk-out, Clare Rose sent letters to the workers alerting them that they would be permanently replaced.

Since beginning their strike, workers have learned that Clare Rose receives tax breaks from the local government for bringing economic development to the Long Island area, further angering the workers who are simply seeking fair wages and benefits. Clare Rose serves as the sole distributor of Budweiser, Bud Lite, Heineken, Blue Point, Greenport, and several other craft beers on Long Island. Workers have been calling on local establishments to halt orders of Clare Rose products. Allies can support the workers by signing the workers’ petition, and hanging a “Boycott Clare Rose” sign in their window.