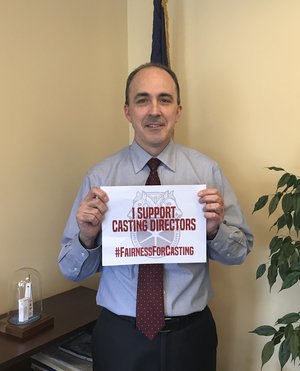 On Thursday morning, Broadway casting directors and supporters rallied outside of a Tony Awards rehearsal at Radio City Music Hall to call for the Broadway League to recognize Teamsters Local 817 as the workers’ union.

This week, the workers received an outpouring of support on social media from Broadway stars. Performers in popular shows like “Hamilton,” “Come From Away,” “Indecent,” and “Book of Mormon” posted pictures of themselves holding signs or wearing buttons that say: “I Support Casting Directors #FairnessForCasting.” Notably, popular actor Liam Neeson also posted a picture of himself holding a sign in support of the workers.

In 2016, the workers joined Teamsters Local 817, the same local that represents casting directors who work in the TV and film industry. Broadway casting directors lack health and retirement benefits and guaranteed payment for all their work, as directors are sometimes left without payment for work from early stages of productions that do not receive funding. The casting directors represent one of the few non-unionized worker groups in what is otherwise an almost entirely unionized industry. Despite this, the Broadway League continues to assert that the workers are independent contractors and refuses to bargain with the union. The workers will continue to fight, supported by other Broadway unions, as Tony Awards weekend begins.

Want to support the Broadway casting directors union? Find out how you can support them on social media.