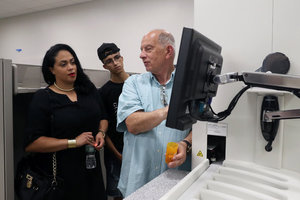 On Thursday, the Hotel and Motel Trades Council held a ribbon-cutting ceremony for its brand new health facility in Brooklyn. The new center continues a decades-long tradition for the Hotel Trades Council, which operates its own health centers in the city staffed by doctors, nurses, and dentists employed by its benefits fund. Per the Council's contracts with the Hotel Association of New York, its 32,000-person membership can receive high-quality healthcare without having to pay.

The new healthcare facility has been designed for efficiency, with the goal of getting patients in and out of the building within an hour. Workers should be able to pick up their medications in the same five-story facility where their doctor writes the prescription, convenient for busy hotel workers who often work odd hours. At a time when the future of healthcare is uncertain, HTC thinks it has found a model that works for its members. “What we’ve got in Brooklyn now is a real crowning achievement and a culmination of over 50 years of accumulated knowledge,” said Peter Ward, president of HTC. “It’s a new healthcare delivery model, which we think will revolutionize the way we do things.”