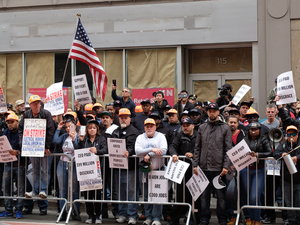 This Thursday, New York City announced it is launching an audit into charges that Charter Communications/Spectrum is breaking its franchise agreement with the City by bringing in out-of-state replacement workers during the ongoing IBEW Local 3 strike. Charter’s franchise agreement, which lasts through 2020, allows them to operate cable franchises in Manhattan, Brooklyn, Queens, and Staten Island. The Department of Information Technology and Telecommunications will be probing to find whether Charter is in compliance with a rule that mandates it use local vendors whenever feasible.

Since the strike began, Local 3 members have spotted license plates at Charter/Spectrum centers from all over New England and from as far away as Illinois, California, and Texas. “We are concerned that Charter Communications may not be taking its franchise agreement with the city seriously. At this point, we have no choice but to conduct an audit to guarantee that Charter is in compliance, particularly with provisions meant to protect workers’ rights,” Mayor de Blasio said.

The 1,800 IBEW Local 3 cable technicians walked off the job on March 28th over the company’s attempts to pull out of their medical and pension plans and the company’s unfair discipline of workers over repeat customer service calls, when the root cause actually lies in the company’s outdated, faulty equipment, and unrealistic promises to customers. Prior to the strike, the workers had been operating without a contract since 2013. The city audit is the latest effort by local elected officials to bring the strike to an end. In the meantime, Local 3 members remain out on the picket line at Charter/Spectrum centers across the city and in New Jersey.

Want to support the workers? Check out our updated list of picket locations, running 8 AM - 5 PM daily, or check the NYCableTruth blog or Spectrum Strike website for updates.