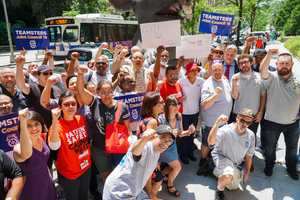 Union workers at Waldner’s, one of the city’s largest office furniture companies, continued their fight against the company this week. About 40  workers were locked out on July 5th and replaced with cheaper subcontractors, after the company refused to negotiate a new contract with Teamsters Local 814. Teamsters Local 814 has filed charges with the National Labor Relations Board over the company’s union-busting actions.

On Tuesday, we stood with Waldner’s workers and rallied outside New York Presbyterian Hospital, Waldner’s largest client in the city, to tell them to Drop Waldner’s! We were joined by nurses, nurse aides, and other healthcare workers from the hospital. Union construction workers also showed solidarity with Waldner’s workers, turning away two Waldner’s deliveries from a New York Presbyterian Hospital construction site on the Upper East Side.

The momentum continued throughout the week, with an announcement Thursday that the New York City Economic Development Corporation had suspended its business with Waldner’s while it investigates the ongoing labor dispute. “It is great to live in a city where the government sides with workers when we are being mistreated,” said Marc Muino, a Waldner’s worker who has delivered furniture to EDC. “When Waldner’s fired us, we lost our healthcare, our income, everything. Waldner’s should take this as a sign that it’s time to sit down and negotiate with our union.”

Check out the Drop Waldner’s website to support the locked out workers!