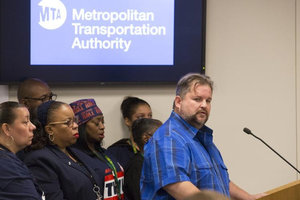 It’s the “Summer of Hell” in New York City, and it seems like everyone has an opinion on how to fix the failing NYC subway system. Thankfully, the people most qualified to provide solutions have spoken: the workers who operate and maintain the subway system every single day. Transit Workers Union Local 100 has proposed a 10-point plan, based on the expertise of their members, for how the MTA should move forward. The proposal, called the Work Boots on the Ground Plan, is focused on upkeep and maintenance of the system on a day-to-day basis to solve the MTA’s crisis of overcrowding, delayed trains, and mismanagement. TWU’s plan calls for an extra $50 million a year, to be spent on an additional 350 signal and car inspectors.

Many of the points, according to TWU International President John Samuelsen, are a return to the MTA’s practices from the 1990s. Back then, signals were inspected and maintained more regularly and spare trains were tucked away in spur tracks, ready to head to a crowded platform when needed. The plan also involves increasing staff and subway cars to keep little equipment problems from becoming massive delays, deploying more troubleshooting teams so they can reach disabled trains faster, and creating a mass-transit system for the buses to make them attractive again to riders. “The lesson that needs to be learned is that you can do all the long-term investment you want in a capital plan, but you can’t forget about day-to-day reliability of the system,” said Samuelsen. Members and officers of TWU Local 100 attended the MTA monthly board meeting on Wednesday, where Samuelsen called on Mayor Bill de Blasio to allocate a fraction of the city’s surplus budget to fixing the subway system.