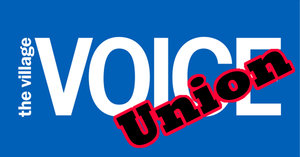 On Monday, 52 of Village Voice’s most esteemed alumni writers issued an open letter to Village Voice owner Peter Barbey, calling on management to meet its members with a fair and reasonable contract. This year, staff at Village Voice are celebrating 40 years of representation by UAW Local 2110. Yet, as the staff attempts to negotiate a new contract, management has presented counter-proposals that roll back many of the union’s gains dating back to 1977. The proposals include eliminating contractual obligations to offer quality health care, abandoning all commitments to diversity in hiring, slashing parental leave and child care provisions, and significantly reducing sick leave.

The Village Voice has changed ownership many times over the publication’s storied history, with Barbey buying the paper most recently in 2015, and workers say their union has been one of the few stabilizing forces. One employee said, “If Barbey gets what he’s asking for with this contract, it’ll toll the final death-knell for the Voice. For the past 40 years, the contracts the union have won have been at the forefront of positive social change. Long before gay marriage was recognized, when you couldn’t find another employer providing benefits to same-sex domestic partners, the Village Voice did, because of its union. Well before most mainstream media institutions were wringing their hands about their absence of newsroom diversity, the Village Voice was doing something about it, bound by its union to a commitment to affirmative action. So far it seems Peter Barbey wants to turn his back on that legacy, which made the Voice great in good times and kept it resilient in hard times.”

You can support the Village Voice union by checking its blog.