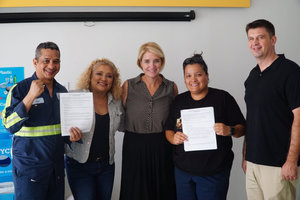 On Wednesday, the largely immigrant workforce at Sims Municipal Recycling in Sunset Park, Brooklyn counted a major victory when they voted to approve their first union contract. The members of Teamsters Local 210 work at the largest recycling plant in New York City, where they process all the city’s residential recycling. The new contract will give all the workers immediate raises, a new healthcare plan completely covered by the company, a retirement plan, increased vacation time, a higher education program, and protection from discrimination.

The successful contract is the culmination of a hard-fought organizing campaign, which workers launched largely over disrespect on the job and an expensive healthcare plan. Workers informed management that a majority had signed union authorization cards in December 2016, but received pushback from Sims. The workers averted a strike, which would have shut down the city’s entire recycling system, when Sims and Teamsters Local 210 agreed to an expedited election in March. The company agreed to remain neutral, and workers voted for the union.

“This victory would not have been possible without the support of our friends in the labor and environmental justice movements, the Sunset Park community, and our elected officials,” said George Miranda, Secretary-Treasurer of Teamsters Local 210. “This is a win that will transform the lives of the immigrant workers at Sims, but it is part of a larger fight to transform New York City’s sanitation system. We are going to win that fight too, for all our workers and communities.”