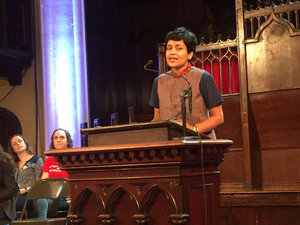 The Broadway Presbyterian Church was packed on Wednesday morning as GWC-UAW Local 2110, the union of Columbia University’s graduate workers and teaching assistants, held a forum about their campaign. The workers have been fighting for their union since the fall of 2014, when over 1,700 workers signed union authorization cards, which were presented to the university in a formal letter that December. The administration responded by hiring a union-busting law firm and waging a vicious anti-union campaign.

However, the union brought its case to the NLRB, which ruled in August of 2016 that graduate workers at private universities have the right to unionize. The graduate workers and research assistants at Columbia then overwhelmingly voted to unionize in December 2016 with a 72% majority. Since then, the administration has continued to refuse to recognize or negotiate with the union, despite the NLRB reaffirming its decision in March.

Wednesday’s forum was an opportunity for graduate workers and research assistants from a variety of departments to testify about their experiences on campus, and explain why a union is so important to improve their working conditions. Among their key concerns include addressing dilapidated lab conditions, better protections against sexual harassment and for international student workers, and more stable health benefits for assistants. Graduate workers who had organized on other campuses also spoke about their experiences.

The forum was attended by supportive NY elected officials, including Congressman Jerry Nadler, Congresswoman Nancy Meng, Assemblymember Deborah Glick, and City Councilman Mark Levine. NYC CLC President Vincent Alvarez also attended and spoke in support of the workers, as they continue fighting for a place at the bargaining table.

Read more about the event here.