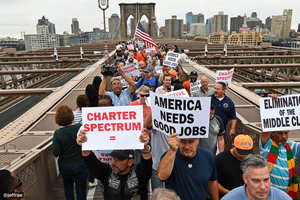 On Monday afternoon, thousands of union workers from across NYC poured across the Brooklyn Bridge in an impressive display of solidarity with our IBEW Local 3 brothers and sisters who have been on strike for nearly six months. Dozens of unions rallied in Cadman Plaza before marching over the Brooklyn Bridge, and then gathering again for a rally at Foley Square in Manhattan. AFL-CIO President Richard Trumka and IBEW International President Lonnie Stephenson traveled to New York to support the workers.  During the afternoon rally, workers heard from Presidents Trumka and Stephenson, IBEW Local 3 Business Manager Christopher Erikson, NYC CLC President Vinny Alvarez, NYS AFL-CIO President Mario Cilento, and striking Local 3 members.  Governor Andrew Cuomo, Mayor Bill de Blasio, NYC Public Advocate Letitia James, NYC Comptroller Scott Stringer, and Manhattan Borough President Gale Brewer also addressed attendees about the need for Charter/Spectrum to get back to the table to negotiate with Local 3.

IBEW Local 3 cable technicians who work for Charter Communications-owned cable giant Spectrum have been on strike since March 28th. The workers walked off the job over the company’s refusal to continue paying into their health and pension plans, benefits their families have relied on for years. In the six months the workers have been on strike, Charter/Spectrum has continually refused to budge on these benefits, despite the fact that the Charter Communications CEO is one of the highest paid in the country. Monday’s action made it loud and clear to Charter/Spectrum: these workers are not giving up, and the entire NYC labor community has their backs.

“[This is] Charter/Spectrum and other corporations seeking to dictate their own selfish terms of employment on these middle class workers, while stripping them of the rights and benefits they have earned, and paid for—these hardworking men and women who want nothing more than to be able to provide for themselves and their families,” said NYC CLC President Vincent Alvarez.