Boycott Hilton Albany Hotel! Sign On to a Letter of Support in Solidarity with Hotel Trades Council Workers 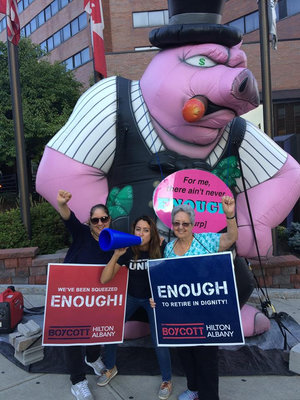 Boycott Hilton Albany Hotel! Sign On to a Letter of Support in Solidarity with Hotel Trades Council Workers

The workers who staff the Hilton Albany (including housekeepers, banquet & restaurant workers, bell persons, and other employees) are in a worsening dispute with the Hilton Albany. The workers’ contract with the hotel expired in April 2017, and they have been working without a contract since then.

Unfortunately, the workers are facing an attack on their livelihoods so severe that they have called for a boycott of their own workplace. The Hilton Albany has proposed completely eliminating its employees’ pension plan, clawing back a week of vacation from its most senior employees, and reducing the number of paid days off that workers can take to grieve the death of a family member. The hotel has even rejected the workers’ request for protections against discrimination based on immigration status, marital status, and political beliefs.

Your union can help, even all the way from NYC! The Hotel Trades Council is seeking sign-ons to a letter of support for its boycott from as many allies as possible, to send a message to the hotel that its proposals are unacceptable and will not be tolerated by the New York labor community. If your organization is able to provide a letter of support, please contact Sandy Arias for a copy of the letter or for more information: sarias@nyhtc.org or 212-245-8100, ext 2241. Thank you in advance for your support!