Count Me In: Building Trades Unions Rally For Solidarity Against Open Shop 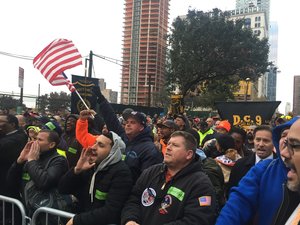 This week, thousands of members of New York City Building Trades unions gathered on 10th Avenue at 34th Street for a solidarity rally against open shop policies on construction sites.  Workers chanted “Count Me In” as a message that they would be standing strong with their brothers and sisters to see that all workers on the sites have the proper safety training and are being given the area standard wages and benefits.

Developers on some large projects in the City have started to use the open shop model which has both union and non-union construction workers on the same projects.  This has lead to lapses in safety at many sites, and instances of serious injury and even death.