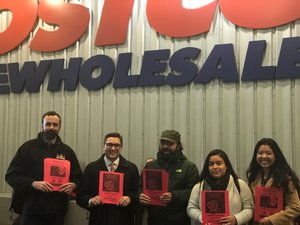 Last year, the Bakery, Confectionary,Tobacco Workers and Grain Millers Union (BCTGM) called for a boycott of Mexican-made Nabisco products, in protest of Mondelez’s (the parent company to Nabisco) policy of outsourcing of U.S. based, union-made products (Oreo, Chips Ahoy, Ritz) to Mexico.  Mexican Mondelez workers are reportedly only paid about $1 per hour.

This week, the BCTGM held a National Day of Action, where unions and supporters were asked to flyer outside of local big box stores to help raise awareness of the boycott. Here in NYC, union staffers gathered at the Costco in East Harlem to flyer and educate shoppers about why they should only buy American-made Nabisco products.