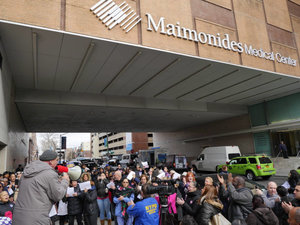 On Monday, December 12th, dozens of Maimonides workers and their supporters held an informational picket protesting management’s decision to lay-off 117 workers represented by 1199SEIU. This picket follows the workers’ protest on November 30th: the Brooklyn-based hospital announced it will lay off workers across departments right before Thanksgiving. While the layoffs have been postponed temporarily, 1199 maintain that there are other ways Maimonides could cut costs, and that the staffing shortages caused by these layoffs could hurt patient care.