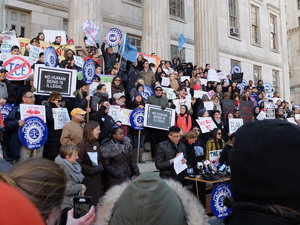 On Thursday, the Association of Legal Aid Attorneys, UAW Local 2325, took to the steps of Brooklyn Borough Hall with allies in the Labor Movement, community groups, and immigration advocates to speak out against the practice of ICE agents arresting and detaining undocumented immigrants as they arrive for court appearances.

The attorneys argue that court staff should be banned from collaborating with ICE officers, and called on the Office of Court Administration and Chief Judge Janet DiFiore to implement a “Sanctuary Court” policy, which would prevent such collaboration.