PSC-CUNY and Allies Rally for a Fair Contract 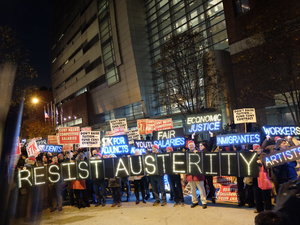 On Monday, adjunct professors in the CUNY system, members of Professional Staff Congress (PSC-CUNY),  joined with labor allies, students, and members of the community to call for a fair contract for the CUNY workers.

Workers marched from the CUNY Graduate Center down to the campus of Baruch College for a rally where they demanded higher pay and fair working conditions. PSC-CUNY is negotiating a new contract with CUNY, which expired on November 30.