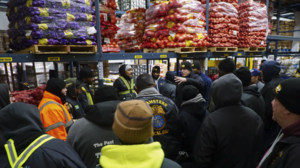 Workers at Hunt’s Point Market have ratified a new three-year agreement that includes substantial pay raises and funding for the workers’ health and pension plans. The agreement was reached after workers had voted to authorize a strike if the Tuesday deadline was not met.

“This strong contract is a testament to the solidarity of these union members,” said Dan Kane Jr., President of Teamsters Local 202. “They voted unanimously to authorize a strike and then they stood strong. The market will continue to provide good jobs to the Bronx’s diverse working families.”

Teamsters Local 202 had been in negotiations since November.