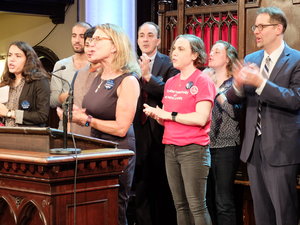 Graduate Workers at Columbia University have begun to organize for a strike authorization vote. Despite winning NLRB certification, Columbia stated it’s intent to wait on a decision from a federal appeals court before taking any action to bargain with workers.

The Graduate Workers of Columbia (GWC) held a rally at two weeks ago Columbia University in response to an email sent by University Provost John Coatsworth stating the University’s refusal to bargain.