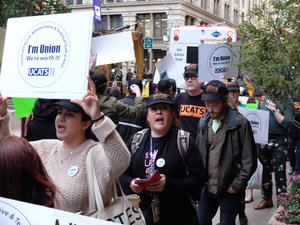 This week the Union of Clerical, Administrative, and Technical Staff, NYSUT Local 3882 (UCATS) announced the ratification of their contract with NYU.

The contract, which includes an immediate 3% wage increase, followed by a 2.5% increase in each subsequent year, had expired in October and a tentative agreement was reached in December following a series of rallies by UCATS members.

An excerpt of the statement from UCATS President Stephen Rechner following the ratification said: “We believe that the wage increases and other improvements we negotiated with NYU represent a meaningful investment in our members who deliver outstanding educational and support services to students and faculty each and every day.”